How many ways can you use Dustless Blasting®?

The Dustless Blaster is a powerhouse for paint stripping and cleaning in so many industries. Everything in the world is painted, rusted, or dirty, and often eventually requires surface preparation. Take a look at twelve of the most common problems that Dustless Blasting can solve. 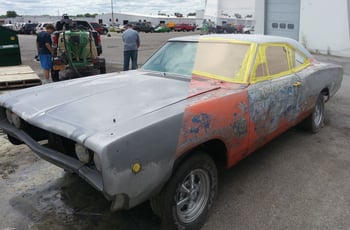 Dustless Blasting is the perfect tool to blast away paint, body filler, and rust. Our method is faster, cleaner, and greener than any other paint stripping technology — read about why it's the future of surface preparation here.

Because our process suppresses dust, you can blast just about anywhere without worrying about the bulky containment associated with traditional sandblasting. This means you can take our mobile machines to your customer's location, offering them a convenient service.

Sandblasting can damage metal because the dry process creates lots of friction and heat, which causes the metal to warp. The water used in our blasting process helps to keep the surface about 10 degrees cooler than the ambient air temperature, so it won't warp due to heat.

Dustless Blasting actually cleans the surface, leaving it free of contaminates and soluble salts that cause flash rust. In addition to this, Rust Inhibitor gives you a primer-ready surface for up to 72 hours. This makes it the perfect method of paint stripping for the automotive restoration business. 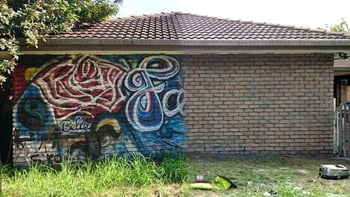 Using Dustless Blasting, you can easily and completely remove graffiti, while leaving the underlying surface undamaged and stripped clean of any paint, dirt, or other contaminants.

Without a huge plume of dust, you can work safely in almost any urban environment. Easily and completely remove graffiti, while ensuring that the underlying surface is undamaged and restored.

While sandblasting takes about 30 seconds for every square inch of powder coating removal, Dustless Blasting can take about a minute per square FOOT  thanks to its unique and powerful process.

Chemical stripping involves dipping powder coated parts into cumbersome vats of toxic chemicals, which is both dangerous and expensive. Dustless Blasting's eco-friendly abrasive is far cheaper and safer. Simply point and blast away even the most difficult of coatings. 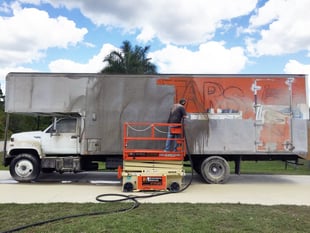 The water in our process reduces friction and heat, which means that the aluminum siding of your fleet vehicle will not warp or bend, unlike with traditional dry blasting.

Dustless Blasting is much more effective than power washing and is the perfect tool for cleaning and restoring masonry, stone, brick, concrete and more.

With the Dustless Blaster's adjustable pressure and abrasive flow, you have complete control over the strength of your blasting, meaning the substrate won't be harmed. Plus, it's far more effective than power washing. Graffiti, line stripes, calcium or oil stains, mildew and even 100 years of grime can be removed with Dustless Blasting's powerful abrasive system.

Dustless Blasters use recycled glass and water as the blast media, ensuring that you won't harm nearby plant life and will comply with governmental regulations.

Because our process suppresses the dust plume, others can work nearby unhindered, keeping your productive and profitable. Workers will also stay safe — read about Dustless Blasting and OSHA compliance.

Since no static electricity or ignitable sparks are produced, Dustless Blasting is safe for oil rig platforms. It can even be used on live pipelines, so you can continue running as normal.

Finally, because the process is so efficient, it uses far less abrasive and water than any other method, meaning less material to transport to and from the offshore platform. 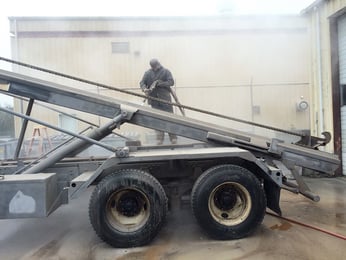 Heavy machinery often uses industrial strength coatings, which are problematic for other removal methods. The Dustless Blaster, with its powerful mixture of water and abrasive, and a highly focused nozzle, can remove the toughest coatings with ease.

Although the Dustless Blaster is the world's most powerful tool for restoration, you don't need to worry about damaging your equipment. Using water decreases heat and friction, so you don't have the risk of warping.

Any down time for your heavy equipment is lost time. With Dustless Blasting, you can strip difficult coatings quickly and with less clean up, getting your machinery and tools back up and running in less time than other methods. 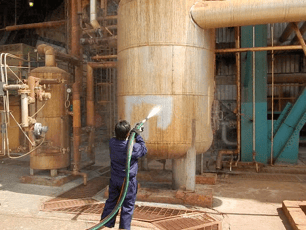 Our process allows you to perform refinery maintenance quickly and efficiently without shutting down plant operations. Others can continue to work alongside the Dustless Blaster because there is no huge plume of dust. Plus, our system creates no ignitable sparks or static electricity, making it far safer than traditional dry blasting.

Quickly strip paint and primer — while also removing rust, grease, and other contaminants — in one easy step. 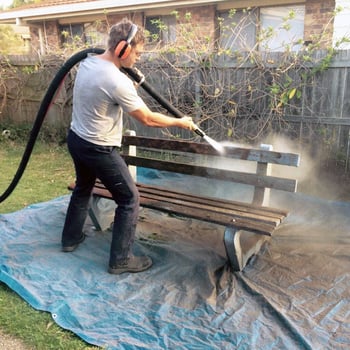 Maintaining the integrity of a wooden surface, whether antique or modern, is something the Dustless Blaster handles with ease thanks to its adjustable pressure.

With various sized nozzles and pressures at your disposal, you can tackle any project, whether it’s intricate detail work or a huge building.

Our machines have been used to restore antiques, furniture, log cabins, decks, patios, siding and much more. Even wood etching is possible with this amazing tool!

Sanding is back-breaking, and and harsh chemicals are dangerous. When it comes to stripping your marine vessel. Dustless Blasting is faster, safer, and more efficient than traditional methods. From anti-fouling paint, to epoxy, to heavy marine growth, the Dustless Blaster will remove almost coating you will encounter.

Because Dustless Blasting mixes water with the abrasive, blast media and residue are trapped and prevented from releasing into the air. This keeps surrounding areas clean and free from mess, and it means that you can work in marinas without disturbing other people and vessels. 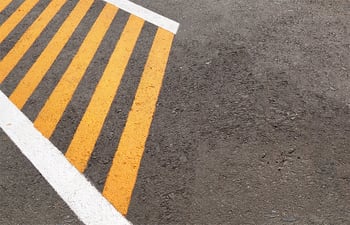 You can even use Dustless Blasting to texture and etch hard surfaces, which can become a huge revenue stream for your business.

Sand blasting and other methods can cause asbestos to become airborne, endangering the health of others. Dustless Blasting uses water in its process, which suppresses and confines asbestos.

Ultra High Pressure systems use a ton of water, which can cause dangerous run off. Dustless Blasting uses 95% less water than UHP, making clean up safe and easy.

Dustless Blasters use recycled glass and water as the blast media, ensuring that you won't have hazardous run off and will fully comply with all governmental regulations.

Though we can't name all of the endless applications for Dustless Blasting, this list begins to explain why it's such an amazing and versatile tool.

By branching out into different applications, you can use your Dustless Blaster to add revenue streams to your business and make even more money. So get out there, and get blasting!

Why does it matter?As a mobile business startup, you won't have any of the traditional real estate overhead of a brick and mortar business. And...