Dustless Blasting is a revolutionary process that helps companies and contractors from all different backgrounds speed up their productivity in surface preparation. Our machines offer three-in-one sandblasting, soda blasting and wet blasting. But what exactly is the difference between sandblasting and soda blasting? Can you use soda in a sandblaster? Knowing the purpose of both the soda and sand blasting processes will help narrow the options for different projects and ensure optimal results. 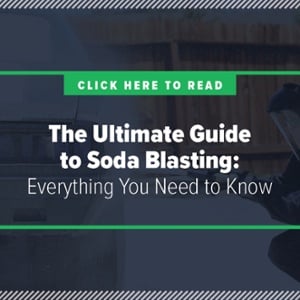 For more information on how the different forms of blasting can better your business, head on over to this article.

The sandblasting process uses sand to strip away rust, grime, oil, dirt and other forms of buildup on steel surfaces. The soda blasting process requires water instead of sand for preparation of steel surfaces. When stripped down to their core, both of these processes are  used to remove rust and dirt from various surfaces. While initially it may not seem there are many differences between the two processes, there are specific applications for each.

Sandblasting is Best Suited For:

In order to remove heavy paint buildup from surfaces such as wood, plastic, concrete and more, the sandblasting process is best suited. Sand can easily strip away heavy buildup from a variety of materials while still going deep enough to ensure that the surface is prepared for paint or paint removal.

Will soda blasting remove rust? Yes, however, soda blasting uses water instead of sand to strip away lighter coatings while still removing the rust and grime.

The dustless blasting process is incredibly versatile and can be used for various purposes. Knowing that as well as the difference between sandblasting and soda blasting can save you time and money. Whether for industrial or personal use, both materials have their own benefits. For more on Dustless Blasting and sandblasting, be sure to check out this article.

Since our dustless blasting machines can do both, the big question becomes which one is right for your project?

Soda blasting uses a special abrasive media, usually sodium bicarbonate (blast media baking soda) in an inert atmosphere. It is a non-destructive and environmentally safe way to clean surfaces and remove coatings. Soda blasting may reduce the risk of fire, explosion and contains no heavy metal residue after removal of the surface.

For more on soda blasting equipment, like our blast pot and blast nozzle, we have an article for you on that.

Sandblasting, on the other hand, uses sand or aluminum oxide as its abrasive medium to remove coatings with impact and pressure. It is widely used as a first step in surface preparation to remove rust and mill scale, leaving a perfectly flat and smooth surface ready for priming and painting. Sandblasting can also be used as a finishing process: The resulting satin-like finish can be advantageous for certain applications where additional slip resistance or chemical resistance is desired. The process is similar to sanding wood, except that the stream of particles is fast enough to actually blast material from a surface instead of scraping or wearing away at it.

For more information on other blast media and when to use them, check out this article.

Can You Use Soda in a Sandblaster?

A soda blaster is a type of sandblaster that uses soda instead of water to create an environmentally friendly blasting experience. Soda, like the baking filler sodium bicarbonate (baking soda), is one of the most commonly used abrasives in blasting. Soda is less expensive than compressed air, making soda blasting an affordable alternative to normal sandblasting.

With that in mind, can you use soda as the abrasive in your sandblaster?

In short, yes. However, keep in mind that if you need to use soda in your sandblaster, you should do some test runs before beginning production blasts or venturing into delicate work. Soda is also not a great media for aluminum blasting, so be sure to check your parts carefully before blasting. For many applications, however, soda is an excellent replacement for silica sand.

Silica sand is often the most commonly used medium in abrasive blasting applications. It is readily available and has a nice balance of abrasion and cost. While silica sand is an economical choice, however, it can be harmful to the lungs if breathed in, so more adequate ventilation will have to be used when blasting with silica as opposed to soda.

Over time you may develop a preference between sandblasting and soda blasting. Especially since alternating between blasting techniques and abrasives is incredibly easy with our Dustless Blasting machines - check out this article for more on that. However, knowing which jobs could be more efficiently and safely done with sandblasting vs soda blasting is integral to your success.

CLICK HERE TO LEARN ALL ABOUT SODA BLASTING IN

THE ULTIMATE GUIDE FOR SODA BLASTING: EVERYTHING YOU NEED TO KNOW